This Distinguished Veteran Runs at His Own Pace

Travis Burns was named a Distinguished Veteran at the Brain Injury Alliance’s 2022 Salute Our Vets 10K/5K/1-Mile Fun Run. That’s appropriate, as the race is a strong metaphor for his experience – in and out of service. 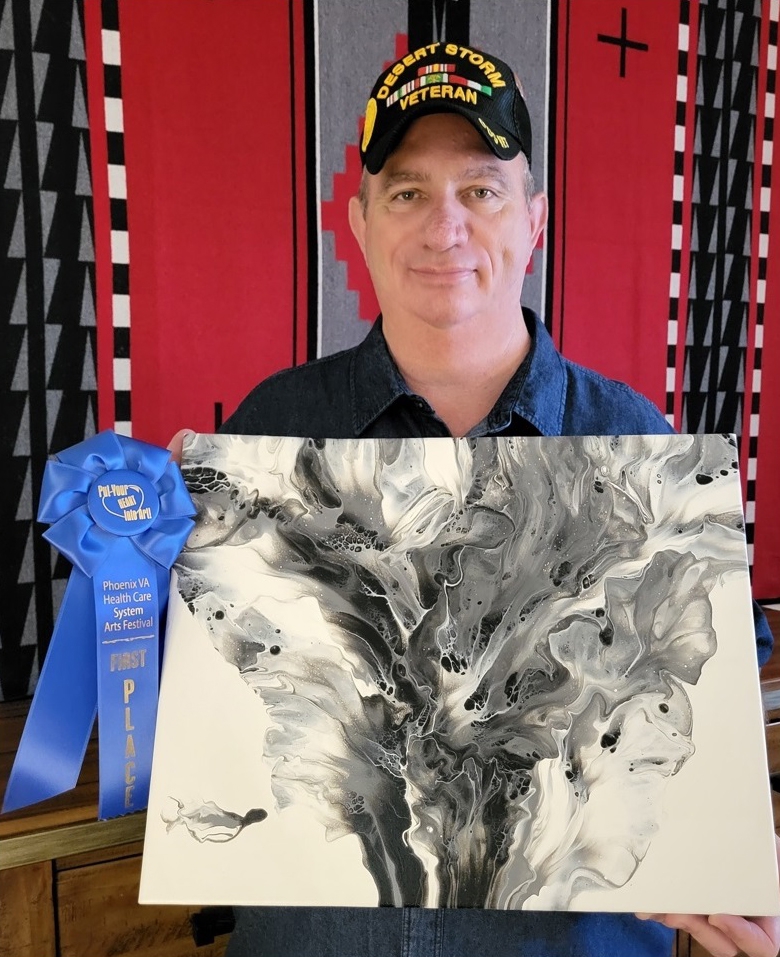 “Take my word for it, even if you’ve had troubles in the past, this isn’t the same VA,” he notes. “They’re here for you, even after service.”

This Distinguished Veteran Runs at His Own Pace

Travis Burns was named a Distinguished Veteran at the Brain Injury Alliance’s 2022 Salute Our Vets 10K/5K/1-Mile Fun Run. That’s appropriate, as the race is a strong metaphor for his experience – in and out of service.

“Take my word for it, even if you’ve had troubles in the past, this isn’t the same VA,” he notes. “They’re here for you, even after service.”

Although he was born in Oregon, Travis’s Arizona roots run deep—over 100 years. His family moved back to the Grand Canyon State when he was very young, and never stopped moving – over 50 times by time he was 18.

So, it’s hardly surprising that he enlisted in the Army. As a member of the infantry, Travis completed basic training at Ft. Benning (GA) followed by a stint at Fort Carson (CO). In October,1989, he was sent to Korea, where he patrolled the Demilitarized Zone (DMZ) at night. It was a different era, and while he could hear the North Korean military activity surrounding him, he never saw a single one of their soldiers, except through a thermal night sight. After leaving Korea, Travis was sent to the Middle East for the Persian Gulf War.

Throughout his time in the Army, Travis experienced eight to 10 brain injuries. “The military is inherently dangerous,” he explains. “There’s a lot of dangerous machinery with those heavy, imposing vehicles. You can fall, be hit on the head with vehicle hatches, be too close to weapons firing, or caught up in explosions – all of which can cause brain injuries.”

Back then, the military’s approach to treating TBIs wasn’t particularly enlightened. They referred to it as “getting your bell rung.”

“When you’d get your bell rung, if you could get back up, that meant you were good to go. They would tell you to finish your work, then rest up later,” Travis recalls.

Out of his four enlisted years, he had been deployed for 28 months. He returned from the Middle East with 98 days until his scheduled discharge. After leaving the Army, he applied for health care. The Veterans Administration (VA) said he didn’t have the appropriate records and he was denied benefits for 18 years.

Travis tried going to college, but to get back home to Arizona, he and his wife instead decided to take up the family business – trucking.

At the time, he didn’t anticipate how trucking would exacerbate his brain and spinal injuries. Since he had to pay the bills, he stayed in the trucking and equipment businesses while struggling with migraines, cognitive symptoms, and PTSD.

The cumulative effects of his injuries became more apparent over the next 20 years, and he was turning into somebody he didn’t want to be. Fortunately, he had a very understanding wife. “She was the one person who stuck with me,” he shares. “She knew the real me and was a great help. Thanks to her, along with a spinal fusion and medication, I was able to carry on.”

Carrie Collins-Fadell, CEO of the Brain Injury Alliance of Arizona, is grateful for Travis’s participation in the veteran community as a whole and his role in the Salute Our Vets Run held recently in Tucson. “Thanks to all of the participants and sponsors, we were able to announce that we raised over $19,000 and those are funds that our Veterans Services Team at the Brain Injury Alliance is immediately able to put to work for Arizona veterans,” Carrie says.

A couple of post-Salute our Vets Run requests that have already come in and been fulfilled as a result of this additional funding include a veteran living in his truck in Prescott who asked for assistance to have his truck’s heater fixed, as well as a veteran who survived a sexual assault and needed counseling services.

Although he acknowledges the struggles he had working with the VA in the past, Travis now highly encourages fellow veterans to seek out all the resources available to them, including disability benefits and health care. “Take my word for it, even if you’ve had troubles in the past, this isn’t the same VA,” he notes. “They’re here for you, even after service.”

Today, Travis is active in several councils and panels that focus on veteran suicide and moral conflicts. “The two are related. There’s a large moral component to warfare,” he says. “Individuals die by suicide when they feel morally compromised. This needs to be addressed.”

Additionally, Travis is a big supporter of the Brain Injury Alliance’s outreach to veterans. “I have been to Survivor Sunday and other support groups. It’s a wonderful organization.” He also serves on the Mental Health Advisory Council and chairs the Veterans Family Advisory Council.

As part of his recovery, he had to come to terms with the fact that life is short and he needed to be able to express himself. This 55-year-old feels he has discovered his true self by writing and learning to play his songs on the guitar. “It started with my journaling, which sounds better than what I called it— crazy guy running around writing down things.

When it comes right down to it, though, Travis’s advice is simple: “You need to put together a life that has meaning for you. Not for anybody else, but for you. It’s like a line from one of my songs: No amount of sorrow will change the past, and no amount of anxiety will change the future.”

He adds, poetically, “Whatever it is that’s inside of you, go ahead and do it. Remember, you’re the one that adds the value to it.” 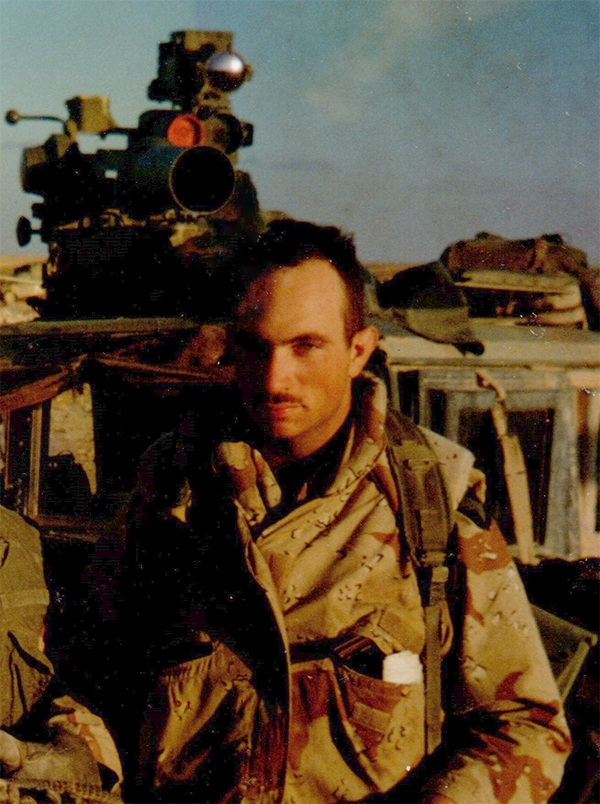 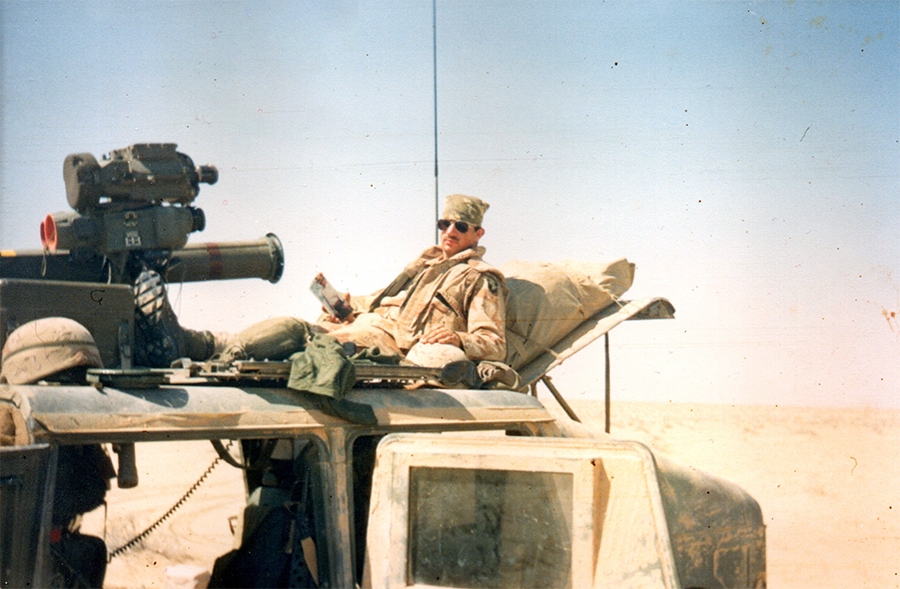