The Strange Case of Phineas Gage

In late September 1848, news of a construction foreman’s improbable recovery after a tamping iron passed directly through his skull began making the rounds in New England.

The story and the man himself, 25-year-old Phineas Gage, provided for decades to come the most dramatic and clear-cut reason to rephrase a perennial mind-body question. In the face of mounting evidence from cases like Gage’s, doctors and researchers no longer asked whether a brain injury changed one’s personality but rather to what extent and how.

Gage’s story is well-known within the brain injury community, partly because it is one of the earliest and best-recorded incidents of someone surviving a traumatic brain injury, or TBI, and also because it offers a clear, easy-to-grasp example of personality change stem- ming from TBI.

The Strange Case of Phineas Gage

In late September 1848, news of a construction foreman’s improbable recovery after a tamping iron passed directly through his skull began making the rounds in New England.

The story and the man himself, 25-year-old Phineas Gage, provided for decades to come the most dramatic and clear-cut reason to rephrase a perennial mind-body question. In the face of mounting evidence from cases like Gage’s, doctors and researchers no longer asked whether a brain injury changed one’s personality but rather to what extent and how.

Gage’s story is well-known within the brain injury community, partly because it is one of the earliest and best-recorded incidents of someone surviving a traumatic brain injury, or TBI, and also because it offers a clear, easy-to-grasp example of personality change stem- ming from TBI.

More recent research into Gage’s story, however, dispels practically every tall tale and anecdote that has been re-told through the decades about his personality change and casts severe doubt on the myriad caricatures drawn of the man.

Here’s a synopsis of what happened on that fateful Wednesday afternoon of September 13, 1848:

On a construction site south of Cavendish, New Hampshire, where Gage supervised controlled explosions that literally paved the way for railroad tracks, he instructed one of his men to pour sand atop the gunpowder already set in a hole.

Unfortunately for Gage, his man never poured the sand in, and worse yet, failed to take notice of this or inform his boss. So when Gage (or it could have been his assistant; the records are unclear) tried to tamp down the sand that wasn’t there — ironically, using a point- ed tamping iron of his own design — he ignited the gunpowder instead. The 3-feet long, 1- 1/4-inch wide tamping iron shot upward, sharp-end-first, through his face and skull, removing a chunk of his right frontal lobe as it whistled high in an arc through the air.

The force of the blast threw Gage onto his back, where he reportedly lay unconscious for a minute or so. When he came to, he hitched a ride back to town and met Dr. John Harlow, who would treat Gage’s wounds and help him during his rehabilitation. It is Harlow we have to thank for the insights gleaned from Gage’s injury, as he documented most of the information we have about Gage’s post-injury behavior.

He is fitful, irreverent, indulgent at times in the grossest profanity, […] manifest- ing but little deference for his fellows, impatient of restraint or advice when it conflicts with his desires, at times pertinaciously obstinate, yet capricious and vacillating, devising many plans of future operations, which are no sooner ar- ranged than they are abandoned in turn of others appearing more feasible. A child in his intellectual capacity and manifestations, he has the animal passions of a strong man.

This passage sketches a picture of Gage as he was just shy of a year following the accident. What isn’t known — and how I wish it were — is how much Gage recovered his social skills from this point forward. After his encounter with the tamping iron, Gage would live another 12 years, 6 months and 8 days before succumbing to convulsions at 10PM on May 21, 1861. His was a long and productive life in spite of the accident, bizarre and grotesque in nature, which made him famous.

As Malcolm Macmillan, psychology professor at University of Melbourne who wrote An Odd Kind of Fame: Stories of Phineas Gage and co-authors a Phineas Gage web-portal puts it, “aspects of [his] case remain obscure.”

What is the exact nature, for example, of the traveling one-man-shows he allegedly pro- duced in “most of the larger New England towns,” as Harlow puts it? Did Gage, according to one unconfirmed report, attend Methodist revivals where he called his recovery a divine act of God?

Macmillan and his collaborators are currently scouting for secondary sources on Gage’s life, which is to say any living person who knew someone who knew Gage himself, in order to gather more information and ultimately answer these and other questions.

So the jury is still out as to whether Gage was “no longer Gage”, as one acquaintance espoused, or whether he eventually got back to his old self, so to speak.

What we can definitely say about Phineas Gage is that his recovery was possible because of the human brain’s neuroplasticity, meaning its ability to change over time in response to external stimuli. After Gage lost a portion of his right prefrontal cortex in an instant, his brain slowly underwent a process known as cortical remapping.

To explain: every part of your body is mapped to a specific area on the cerebral cortex—that gray, folding outer layer of the brain—creating a “cortical map” which accounts in large part
for the coordination and consistency in a person’s cognitive abilities, traits and patterns. When the cortical map is disrupted — due to a traumatic brain injury, for example — the brain can, to the extent that it is capable, reroute and rewire its own neural pathways, in effect remapping the cerebral cortex. 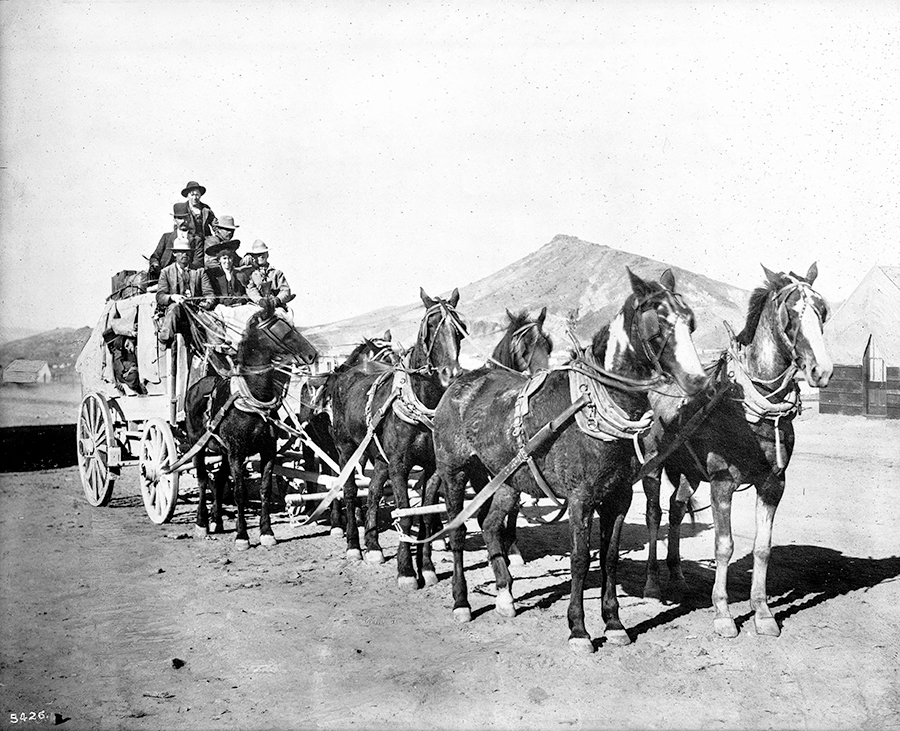 A six-horse stagecoach like the one Phineas Gage likely drove until the end of his life. The work, requiring him to manipulate the reins and stay on a consistent schedule in a set routine, likely acted as a kind of vocational rehabilitation for Gage.

What we know now about brain injury and how neuroplasticity works suggests a paradoxical view of the mind’s relation to the body. While you’re still the same person in all practical senses before and after a brain injury, neurologically, your brain has to change—and good thing it does! But in the process of cortical remapping, aspects of what most people would consider core features of their personality simultaneously undergo changes. Without being reborn, you suddenly in- habit a permanently altered physiology. Doesn’t whatever you consider “you” have to change as well?

Near Harlow’s home in Cavendish where Gage spent time recovering, the tamping iron he self-designed that become his agent of change lay in storage at a local shop. There was, however, one other memento: at his work site sometime before the accident, Gage took a few stones and pebbles from a dry riverbed; by chance they remained in his pocket throughout his ordeal.

Harlow wrote that during a tumultuous first month of recovery, between fits of delirium and long bouts of sleep, Gage held the stones in his hand and became so intensely attached to the stones that he “would not take one hundred dollars for [them].”

Although Gage later also grew fond of his illustrious bespoke tamping iron, at this point in time, Phineas clung to riverbed stones—stones from before.

Time is a slow healer, but as his acute recovery phase came to a close, Phineas Gage, like most people who have recovered from a catastrophic accident, was eager to go back to work.

According to Dr. Harlow, the physician who treated Gage after a railroad tamping iron shot through his skull, Gage initially traveled around New England exhibiting himself, his tamping iron and his incredible story of survival. He was even briefly an attraction at P. T. Barnum’s eponymously-named museum in New York.

But Gage soon found the public—to paraphrase a quip from Barnum—was a strange animal with fickle taste. Not long after, in 1851, Gage gravitated towards a new interest in horses and stagecoach driving, finding work at a livery stable in Hanover, New Hampshire. This 18-month stint proved to be a stepping stone to a gig which suit- ed Gage particularly well as a stagecoach driver in Valparaiso, Chile.

When seen through the lens of modern medicine, specifically neuropsychology and neurorehabilitation, some of the lesser-known details from Gage’s life story are given new and enlightening context. Driving a six-horse stagecoach on rugged dirt roads for several hours at a time demands a sustained level of focus and alertness, but also exercises and hones those abilities. Manipulating the reins while being constantly aware of his surroundings and potential road hazards likely helped Gage regain cognitive endurance. Having a set course and regular pick-up and drop-off stops gave him routine and structure that probably helped him to deal with any executive dysfunction. In that sense, Gage’s stagecoach job has much in common with Cognitive Rehabilitation

Therapy, or CRT for short. CRT is designed for the purpose of helping people with TBI and other cognitive impairments re- learn and reinforce their capacity for attention, memory, visual/spatial functioning, language and communication skills, executive functioning, problem-solving and awareness. You can learn more about CRT here..