Brain Injury Survivor Finds The Funny In Her Life-Changing Experience

“I don’t know if I’m gonna die in five days or five minutes. But I did not clear my browser history.” – Mimi Hayes

Mimi Hayes wants you to laugh at her pain. That’s not what you typically hear from a brain injury survivor, but there’s nothing typical about Mimi.

In 2014, 22-year-old Mimi had just graduated and was starting her new job as a teacher at East High School, just outside Denver. She was also a runner, writer, and in great health.

A mere week away from starting her first day as a student teacher, her world would be turned upside down while on a blind date, though not for the reason you may think. During the date, she experienced a terrible headache, and, unbeknownst to her, a hemorrhage in her cerebellum. Sensing something was wrong, Mimi’s mother took her to urgent care that weekend.

The doctor didn’t think anything was seriously wrong and sent her home.

Over the course of the next few days, Mimi experienced dizziness, nausea, and was having double-vision. Again, her mother insisted she return to the hospital, where it was suggested she might be suffering from vertigo or an ear infection. Once again, she was sent home, with the recommendation she follow up with an Ear, Nose, & Throat (ENT) specialist.

The next morning, she felt even worse, but was unable to get ahold of her doctor. When Mimi’s doctor finally called her back, it was to assure her what she was experiencing wasn’t an emergency. She suggested Mimi take some valium and go to bed. Infuriated, Mama Hayes brough Mimi back to the ER, insisting they wouldn’t be leaving until someone could tell them what was going on with her daughter.

A nurse incorrectly performed a neuro check, so once again, Mama Hayes came to the rescue, carrying out a proper assessment. Since it was discovered that Mimi’s eyes weren’t tracking, Mimi’s mom demanded they do due diligence and perform an MRI, which they eventually begrudgingly agreed to do. That’s when they discovered Mimi had a small brain hemorrhage, but insisted she go home and spend a month on bed-rest.

During that month, she couldn’t walk, continued seeing double, and developed slurred speech. But the final straw for Mimi was when she lost her taste buds.

So it was back to the hospital for a second MRI, which showed the hemorrhage had increased in size, and was now big enough to be removed safely. Three days later, she had successful brain surgery, but the hard work was just beginning.

Post-surgery, Mimi was still seeing double… and also sideways. She had to retrain her neck to move on its own and do eye exercises to flip her vision right-side up again. Despite this, the hospital wanted to send her home in order for her to recuperate in her own environment. Super Advocate Mom would have none of it, and had her admitted to Spalding Rehabilitation Hospital in Aurora, Colorado instead.

“Everyone asks me what it’s like to have a brain hemorrhage. They’re like, ‘did you taste shapes, or hear colors?’ No. It felt like a headache. You’re probably having one right now.” – Mimi Hayes 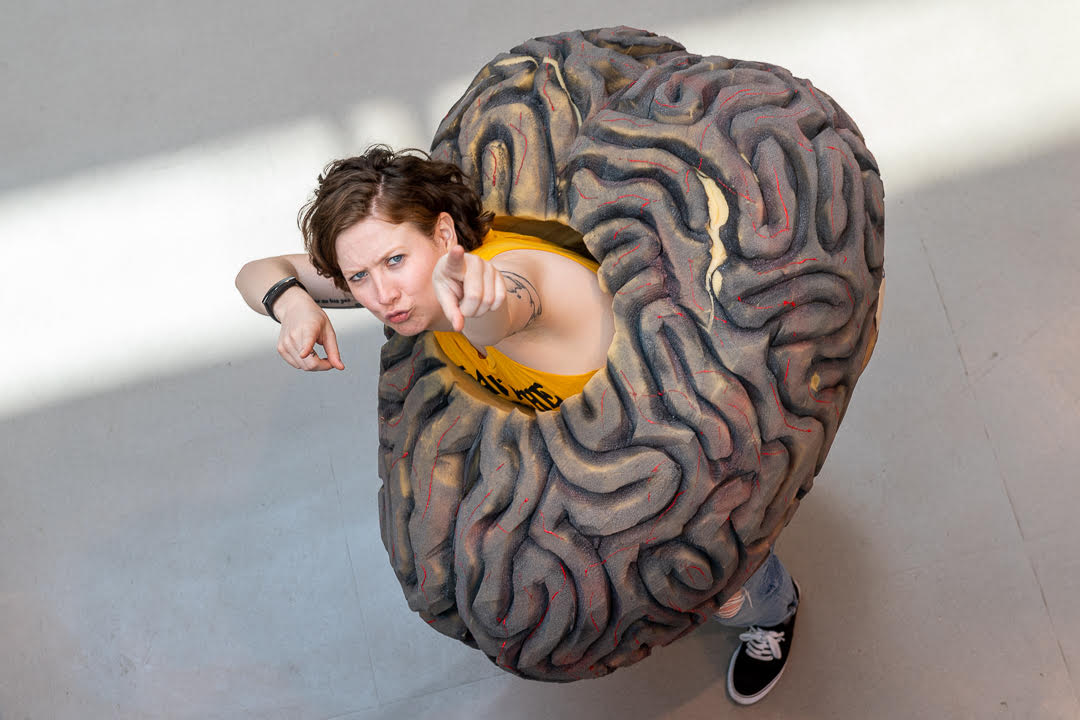 Over the next three months, she fought her way back through an intensive program that incorporated speech, physical, and occupation therapies. She had to relearn everything – even how to walk again.  Within a month, she was back on her feet; another month later, she was cleared to drive, and a month after that, she was able to run again.

Her biggest issue was the inability to filter audio through her ears, as she perceived all stimuli at the same level. This made paying attention an annoying struggle. No wonder she was exhausted every day by 5:00 p.m.

With limited energy, she realized she had to prioritize what she wanted to do with her life and not let her brain injury get her down. After returning to the classroom for two years, she made an unusual decision.

Mimi moved to New York to perform stand-up comedy. While there, she finished the memoir about her acquired brain injury experience and recovery that she’d initially started when she received her diagnosis. Before long, she was on stage at Stand UP NY, Dangerfield’s, and The Upright Citizen’s Brigade.

Appropriately enough, her book is titled I’ll Be OK, It’s Just a Hole in My Head: A Memoir on Heartbreak and Head Trauma. In it, she reveals her inner thoughts and struggles. Spoiler alert: she’s doing much better now.

Mimi also adapted her book into a one-woman show, which she debuted at the 2019 Edinburgh Fringe Festival. True to form, she promoted her show by walking through town dressed as a giant brain. She also has a popular podcast, “Mimi and the Brain,” which includes discussions with neuroscientists.

“Have you ever been on a date so bad you can hear your uterus shutting? Like a scene out of Game of Thrones: ‘CLOSE THE GATES! CLOSE THE GATES!'” – Mimi Hayes

Mimi Hayes’ experience isn’t unique. When it comes to brain injury, it’s often difficult to get an accurate diagnosis, but she encourages people to be self-aware. “Take care of yourself; listen to your body. Have clear boundaries with yourself. If you’re tired, take a nap. Drink lots of water. And don’t be reluctant to call 911.”

Her story also underscores the importance of having a vocal advocate. In her case, it was her mother. Mimi offers this: “My advice to anybody in the same position: Have a mom like mine…or just call my mom.”

FOR MORE ON MIMI:

Brain Injury Alliance of Arizona (BIAAZ) is the only statewide nonprofit organization dedicated to improving the lives of adults and children with brain injuries through prevention, advocacy, awareness and education. What began in 1984 as a grassroots effort has grown into a strong statewide presence, providing valuable life-long resources and community support for individuals with traumatic and non-traumatic brain injuries, caregivers and the professionals who work with them.

Brain Injury Alliance is also committed to providing care for veterans, which includes working with the Congressional Brain Injury Task Force on legislation requiring those dishonorably discharged to be certain their behaviors are not related to brain injury.