Dr. Clint Pearman is a frequent guest and trainer at Brain Injury Alliance of Arizona events.  Ellen Fortini spoke with him recently to find out what drives him. 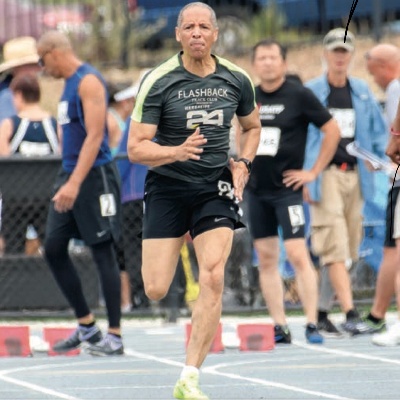 Dr. Pearman, 64, is a Certified Brain Injury Specialist Trainer who serves as the regional education coordinator for the Defense and Veterans Brain Injury Center (DVBIC) at Camp Pendleton, California.

Dr. Clint Pearman is a frequent guest and trainer at Brain Injury Alliance of Arizona events.  Ellen Fortini spoke with him recently to find out what drives him.

When Clint Pearman was 13, his parents moved from suburban Long Island to rural Belleview, Florida, where they built a farm, complete with cows, goats, chickens, and pigs. One summer morning, young Clint was tasked by his father with digging an eight-foot-deep cesspool. Armed with a shovel and a pickaxe, Clint got down about six feet before he hit a rock “the size of a beachball” and decided it was time to call it quits. He told his father of the impeding boulder and was handed a sledgehammer to finish the job.

For several hours in the hot sun, Clint repeatedly hit the boulder without a single crack or bit of movement. “Dad, it’s not working,” said Clint. “Keep hitting it,” his father replied. As the sun set, Clint’s mother came outside and said to her husband, “You need to let him come inside. It’s starting to get dark.” Confident in his son’s abilities and the lesson being imparted, the elder Pearman simply said, “He’ll come inside when he finishes what he’s doing.”

“Yeah, I’m gonna’ break this rock!” said Clint, blasting away with newfound resolve. When it finally cracked open, the teenager was rewarded with a deep sense of accomplishment. “I leaned to never quit, and from that point on, that rock has been what I thought of whenever [the option of] quitting came up. You never know if the next thing you do will lead to your success. Most people quit when success was right around the corner. What if I had quit right before the rock broke?”

This mindset, developed one Saturday afternoon fifty years ago, has been a cornerstone in Clint Pearman’s career progression, and has seen him through 31 years of service in the US Marine Corps as well as two doctoral programs.

Dr. Pearman, 64, is a Certified Brain Injury Specialist Trainer who serves as the regional education coordinator for the Defense and Veterans Brain Injury Center (DVBIC) at Camp Pendleton, California.

Today, Dr. Pearman, 64, is a Certified Brain Injury Specialist Trainer who serves as the regional education coordinator for the Defense and Veterans Brain Injury Center (DVBIC) at Camp Pendleton, California. “In the United States, we have thousands of service members who have experienced traumatic brain injuries and are struggling with symptoms, but many of them have no idea what is wrong. So my job has been to educate the medical personnel and service members on the resources available to help them get better. My passion is for helping those who truly need this information.”

Education has been a consistent theme in Pearman’s life. He left for Marine Corps basic training a day after graduating from high school – nearly having neglected to tell his parents he’d even joined the service – and found out early on that he’d been assigned to the infantry. He spent his early days as a Marine guarding a naval submarine supply ship, before retraining as a nuclear, biological, and chemical specialist in time for the first Gulf War. But it was later, in his position as an infantry operations chief, when his interest in research and education developed. Responsible for overseeing his unit’s weight-loss program, he noticed the plan wasn’t working. In fact, he reluctantly had to release some Marines who were unable to meet the criteria. Pearman thought there must be a better way to achieve results and retain servicemembers, so he began investigating methods on his own.

“In order to accomplish anything significant in life you’re going to have to realize you have to take responsibility,” says Pearman. “As an operations chief, I was responsible for developing the training plan. If it failed, there was no one I could blame that on; it was totally my responsibility.”

Significant accomplishments abound in Pearman’s life, from his academic studies and doctoral research on obesity culture, to ranking as an All-American in his age group in the 50-meter dash at the US Masters Track and Field Games, it’s easy to see how taking personal responsibility has resulted in success.

In 2012, having completed his first doctorate in organizational development, Pearman started a health and wellness coaching practice. When his granddaughter noted he wasn’t practicing what he preached, she inquired as to why he didn’t exercise. So Pearman decided to set a new goal to return to his athletic past. A four-sport athlete in high school, Pearman excelled in track and field, and at age 57, found himself in Pasadena at the 2014 California Senior Games Championships, where he pole vaulted for the first time since 1983, winning for his age group. Having sustained an injury at the meet, he decided to switch to sprinting and learned to train like a champion: simply working harder than his competition. He plans to take part in the next national championships and has his eyes set on qualifying to compete in the next World Track and Field Championships in the 100- and 200-meter dash events.

“The best advice I can offer is, we all have a piece of equipment between our ears that can do almost anything want it to do, but you have to master it,” says Pearman. “When you master your thoughts, beliefs and attitude, you can accomplish almost anything you set your mind to.” Similarly, he says that the best advice he has ever received is to decide what you want to do, develop a plan, set goals and surround yourself with people who can advocate for you.

“The first big goal I remember setting in life was to get the heck off that farm,” said Pearman. “Growing up in New York, then moving to a real farm, it wasn’t much fun because you have to work before you go to school and then you have to do chores when you come home from school. So I set out to play every sport my high school had so I never had to come home. Football, basketball, baseball, I ran track. I even tried to get on the golf team,” he jokes, “But we didn’t have a golf team.”

Now, well into his second doctorate program in health and wellness psychology at Ashford University, which is soon to become part of the University of Arizona Global Campus, Pearman is designing a program to be implemented on a national level as a system to bring groups of people together under a similar, positive mindset to promote health initiatives. Tai chi is the vehicle Pearman has in mind and he sees it as the foundation for health behavioral change. He says the social component of the practice is ideal for encouraging a captive audience to explore topics such as weight loss, smoking cessation, and heart disease prevention. He also aims to see TBI training incorporated as part of basic first aid training for teachers, coaches, and medical personnel across the country.

For decades, the idea that people can reform their beliefs and attitudes has been at the core of his work and studies, and Pearman highlights neuroplasticity as his favorite fact about the brain. “Years ago, it was believed that the brain was hard-wired, especially after you become an adult. It wasn’t until the 1990s that scientists and brain-imaging specialists started learning that the brain can change,” says Pearman, explaining that after successful lobbying by the neuroscience community, President George H. W. Bush declared the 1990s the Decade of the Brain, an initiative that opened up congressional funding for institutions to do research. “The biggest thing they learned in the first 10 years is that the brain can change. That is called neuroplasticity,” explains Pearman. “Even more powerful is that you have control over making those changes, and that is called self-directed neuroplasticity.” The concept was pioneered by Dr. Jeffrey M. Schwartz, a research psychiatrist at UCLA, who discovered that you can change based on your thoughts and beliefs. “You are not stuck with the brain you have,” assures Pearman. “If you don’t like it, you have control over influencing how to change to one that is more conducive to what you want.”

Pearman also speaks to taking personal responsibility as a key component to achieving success, saying it’s up to each individual to identify what success means to them and then realize that “the little voice in your head is the biggest obstacle, based on self-limiting beliefs.” He advises transforming that voice into something that will support one’s chosen endeavors. Pearman enthusiastically shares simple, effective inspiration like this, but who inspires him? He says it’s people who have pursued changing the world in different ways and specifically mentions Mahatma Gandhi, Dr. Martin Luther King, Jr., President Barack Obama, professional athletes who stand up for what they believe in and – reiterating the Marine Corps core values – “anyone not afraid to exhibit honor, courage and commitment.”

It was these values that took Clint Pearman from a rocky farm in Florida to achieve a life of service as one of the country’s leading brain injury educators, as well as recognition as a world-class athlete. But to him, living these values comes naturally. “You see,” he says, “if you stick around the Marine Corps long enough, you don’t know any different. Make excuses or have success, but you can’t have both.”