When Mickey Calvert speaks about his son Ryan, he gets emotional. You can see the love in the eyes of the retired elementary school principal/jazz piano player as he tells his son’s story. But it is also Mickey’s story. 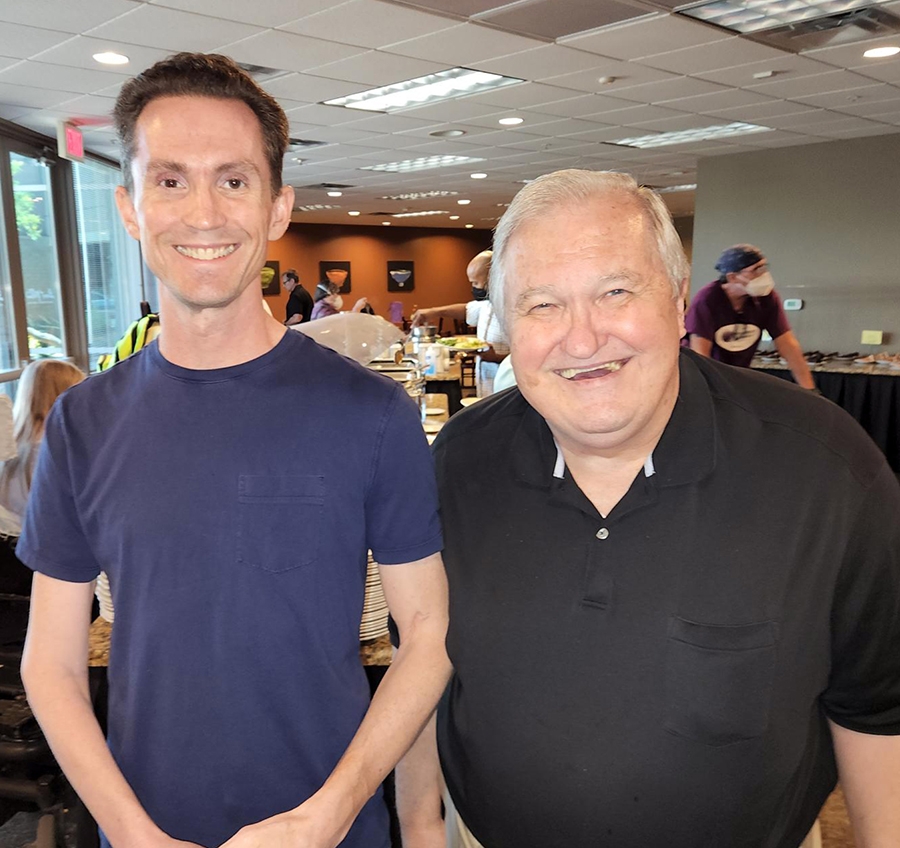 This year’s Rays of Hope conference for survivors and caregivers gave father and son the opportunity to reconnect with the brain injury survivor and family community in-person.

When Mickey Calvert speaks about his son Ryan, he gets emotional. You can see the love in the eyes of the retired elementary school principal/jazz piano player as he tells his son’s story. But it is also Mickey’s story.

This year’s Rays of Hope conference for survivors and caregivers gave father and son the opportunity to reconnect with the brain injury survivor and family community in-person.

It was early evening, September 8, 2006, and Mickey went to his then 25-year-old son’s room to let him know dinner was ready. He found Ryan sound asleep on his bed. Mickey let him rest, checking on him periodically. The next morning, Ryan wasn’t responsive, so the paramedics were called.

Three weeks earlier, Ryan had surgery on his arm and had been recovering. Like his dad, he was a musician – a drum major, pianist, and even a trumpet player with a Mariachi band – so he was very disciplined.

When the paramedics arrived, they asked if Ryan did drugs. He did not, although he was exhibiting many of the symptoms of someone who did. At the ER, the doctor informed his parents that Ryan had a stroke resulting from a blood clot from the surgery three weeks prior. It occurred in the left side of his brain, affecting the right side of his body. While Ryan was in the ICU at Mercy Gilbert Hospital, Mickey was shown an MRI of his son’s brain, half of which was now solid gray.

When the doctor informed him that Ryan’s brain would be permanently affected, a million questions raced through Mickey’s own brain. Because of the clot, Ryan had experienced an ischemic stroke and although he couldn’t speak, he could move his little finger toward his sister to indicate he was aware of his surroundings.

Over the next several months, he made progress at Good Sam’s Rehabilitation Center. He undertook speech, occupational, and physical therapies, music, and animal therapies to relearn how to sit up and eat, all without the use of his right side.

“As a school principal, I used to work with OT, PT and Speech teachers, but never really knew what they did,” says Mickey. “Now I was developing a real understanding of their importance.”

As a new caregiver, he learned a great deal more upon Ryan’s discharge. “I began to appreciate the little things, like the ability to cut a piece of meat,” Mickey recalls. He also became well-versed in the miracles of adaptive technology. “It was a real milestone when my son could drive again. At Swan Rehab, they fitted him with a device called a Bioness that compensated for his foot drop, allowing him to walk and jog. He also has an adaptive trike he rides with other guys.”

Ryan was able to resume his studies. His stroke occurred a semester before his graduation from NAU, but he has since recently received his AA at Chandler-Gilbert Community College.

He also holds down two part-time jobs and also volunteers at Queen Creek Botanical Gardens while he works on his Master Gardener certificate. Ryan also has worked for Guthrie Mainstream Services for 12 years, where he helps people with special needs.

In 2013, Mickey’s wife passed away, increasing his loneliness as well as his responsibilities. It was imperative that he and Ryan be surrounded by a group of people to go to bat for them. He found that at the ASU Speech Department, where they helped Ryan with his aphasia. Additionally, the OT, PT, Speech, and Vocational Rehab specialists at Swan Rehab have made a huge positive impact on Ryan’s life. “We also developed a close group of friends we can talk to. They’re truly a delight to be around,” Mickey says.

He cites the brain injury community as key to their support system. “After Ryan had his stroke, many people pointed us toward the Brain Injury Alliance. That’s when we became aware of them.”

The night and day difference having an organization like the Brain Injury Alliance in your corner can make is not lost on Mickey. “Without them, everything can be overwhelming, especially figuring out doctors, medications, and negotiating state and federal systems. I don’t know how one person without support can do this. They helped set us up with sources of information, referrals, ideas for adaptive technology, and answered tons of questions.

The Brain Injury Alliance is a team of professionals getting all this done. We were very impressed.”

This year’s Rays of Hope conference for survivors and caregivers gave father and son the opportunity to reconnect with the brain injury survivor and family community in-person. It was the first return of the highly anticipated event since the on-set of the COVID-19 pandemic.

“This has been a real journey on both of our parts. You may lose some friends along the way,” explains Mickey. “But look around at all the new great ones you’ve made.”