Cazoshay Marie is a familiar face in the brain health community. As a survivor of a brain injury, she is active in survivor groups, caregiver conferences, and empowerment events in Arizona.

As a result of her advocacy and speaking, many have heard the story of that horrific day in 2017 when Cazoshay was hit by a car as she moved through a pedestrian crosswalk in downtown Phoenix. She was thrown 15 feet in the air and 100 feet forward, landing on the hard concrete road, unable to move. The driver stopped, surveyed the situation, but never got out of his car. To this day, he has never been identified. 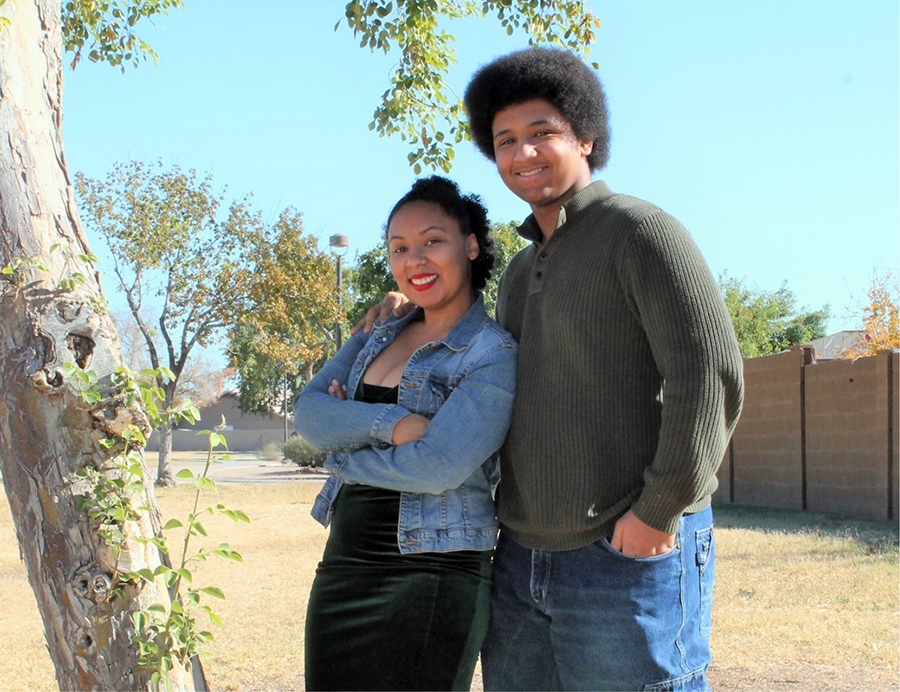 Cazoshay Marie is a familiar face in the brain health community. As a survivor of a brain injury, she is active in survivor groups, caregiver conferences, and empowerment events in Arizona.

As a result of her advocacy and speaking, many have heard the story of that horrific day in 2017 when Cazoshay was hit by a car as she moved through a pedestrian crosswalk in downtown Phoenix. She was thrown 15 feet in the air and 100 feet forward, landing on the hard concrete road, unable to move. The driver stopped, surveyed the situation, but never got out of his car. To this day, he has never been identified.

She had moved from Anchorage, Alaska six months earlier, ready for a new start. Within seconds, the professional speaker and wellness lifestyle blogger’s life changed. Behind the physical injuries to her fibula, jaw, and nerves, she had a traumatic brain injury (TBI) with additional symptoms that were invisible to others. She continues to live with chronic pain, frequent migraines, issues with her neck, nerve damage, impaired vision, and short-term memory loss.

But throughout her recovery, another person has been traveling a parallel journey every step of the way – her son Nate.

He was only 11 when the accident occurred. While he didn’t witness his mother’s injury, the second he heard about it, he was terrified. “In that moment, my world collapsed around me,” says Nate. “I honestly thought she would die, and I’ll never have a mother.”

Over the next three weeks, he saw that she would survive, even though it would take some time to recover from her physical wounds. However, Nate is the kind of kid who always wants to help, and he jumped right in. “I did more chores without being asked, including helping with cooking and cleaning.”

Cazoshay saw the effort her son was making and had mixed feelings. She recalls, “As his mom, I felt bad that he felt as though he had to grow up quicker in order to help me. As a single parent, I was used to doing everything myself and suddenly, it wasn’t that easy.”

On top of everything, the toll the TBI and nerve damage were taking only added to the stress. Nate recognized there was more to his mom’s recovery than met the eye. “I would tell her something and she wouldn’t remember what I had just said. When this happened over and over, I thought, ‘Maybe there’s something going on inside her,’” he shares. “I saw how hard it was for her to process our conversations and there was nothing I could do about it.”

In retrospect, Nate says his friends really did not know how to support him, which is a common occurrence for family members of survivors of any age. He could talk to his uncle and grandmother, who were there during Cazoshay’s initial recovery, but he couldn’t confide in his peers. “I tried talking to friends, but instantly regretted it,” he admits. “They hadn’t experienced brain injury and didn’t understand. They would say things like, ‘Can’t she just have surgery and get better?’”

When you’re a family caregiver in need of support, such suggestions can come across as unsympathetic at best. “I really resented that they tried make light of the situation,” Nate says. In response to others’ insensitivity, he would try to lift his sagging spirits by drawing, listening to music, and playing on devices.

The big game changer for both mother and son was when they sought therapy services. “Our counselor got us to discuss the accident and express our feelings about things. I was angry at the person who hit her. He never even got out of his car. I mean, I believe in forgiveness, but I don’t know if I can ever really forgive him for his actions,” Nate states.

Cazoshay feels similarly. “I do express anger sometimes. He was the only driver who didn’t stop in the crosswalk. He just left me there, bleeding in the street.” Seeing how all this has affected her son further added insult to injury. “I was very concerned about Nate, how he would come out of all this. He’s okay, but sometimes I can see that it still affects him,” she admits. Her biggest regret is missing five years of being able to see her son play basketball, flag football, and lacrosse.

As both heal from the fallout of the accident, several things become apparent: The first is the need for support. Cazoshay has been passionately involved in several of the Brain Injury Alliance of Arizona’s programs, including the Unmasking Brain Injury program that uses art to help survivors visually process their experience and share their stories. She has also spoken at the annual Rays of Hope survivor and caregiver conference and participated in various support groups. Additionally, Cazoshay and her son travel with the Brain Injury Alliance CEO to talk with graduating occupational therapy students at major universities, aiming to instill in them the human aspect of healing from the invisible disability.

“There are amazing resources out there that can help you connect with others with brain injury. It’s a fantastic outlet to share your story, educate others, and heal, no matter how severe your injury or prolonged your recovery,” says Cazoshay.

Carrie Collins-Fadell, CEO of the Brain Injury Alliance, notes that both spiritual and physical healing are often a family affair. “Cazoshay is a bright light, illuminating the way for so many others. Like many survivors, her life changed in a moment. The way she and her son Nate are sharing their story so openly, they are continuing to give back, even when they themselves are still healing.”

Second, they encourage patience. Now 15, Nate explains, “I just wanted her to get better right away. I learned that’s not how it works. That’s what my friends didn’t understand and, really, neither did I. Just because the disability is invisible doesn’t make it any easier. In fact, it’s harder. Everybody’s recovery is at their own pace.”

Cazoshay concurs. “You have to remember progress can take years, not days. Eventually, you see results.”

Third, go easy on yourself. Nate recalls those first months after the accident. “I used to think, ‘Why did this happen to me at this time of my life? Out of all the millions of things, why me and my mom?’ I was surprised by how intense my feelings were. It was like being hit by an emotional car.”

To the children of survivors, Cazoshay cautions, “Don’t try to take on everything, even if the parent can’t do as much. Kids should talk about how they feel. Nate was holding it in. Don’t push until your child is ready; it’s a process. I would always ask him how he was feeling and let him know it hurt me to see him hold it in. It’s ok to feel anger.”

Nate remembers, “At first, I tricked myself into feeling I was fine. I was very hopeful about her being better, getting into a more normal state. It just takes time.”

Today, he has taken up fencing while also getting good grades in high school. “I help whenever I can, but I also know that I need down time and watch out for my own well-being,” he says.

Finally, never give up hope. “It doesn’t help to judge yourself against who you were or want to be,” points out Cazoshay. “I may have migraines, memory loss, blurred vision, and dizziness, but we still have a life. I still speak, share on social media, create art, and blog as I am able. And Nathaniel is a wonderful son.”